Nikolas Kontoyannis is the source of inspiration for this annual Symposium.

In 1981 Nikolas was barely four weeks old when he was rushed to Great Ormond Street Hospital in London with inexplicable skin rashes over his entire body and inside his mouth, secreting fluid. He was treated with topical mustard gas for this but his condition was deemed critical. Nikolas was put under the direct care of Dr. Jon Pritchard, a pediatric oncologist, who became his primary doctor.

The prognosis: Slim chances of survival

At the time, little was known about the disease and its pathological structure was difficult to discern. When he was less than a year old, Nikolas underwent a painful mouth curettage as a direct consequence of the disease, causing deformities in the mouth. There followed an uncertain period that would disrupt Nikolas’ upbringing and life in his formative years and beyond.

Between the ages of 6 and 7 he was diagnosed with ataxia and osteoporosis. It became apparent that he was also suffering from growth deficiencies, which brought about the need for growth hormone treatment, lasting almost 4 years. Nobody knew what the future would hold for him and the threat to Nikolas’ life was ever present.

By the age of 7, CNS (Central Nervous System) involvement was detected, and Nikolas was showing signs of short term memory loss and had started to develop learning difficulties. The latter gave rise to a precarious and unsettled puberty, triggering severe psychological issues and episodes for him as he was growing up.

At 11 years of age hydrocephalus was detected. Nikolas had to have a ventriculostomy performed, shortly after which he started having seizures, prompting the need for medication which he takes to this day. Due to CNS involvement, problems and accidents relating to Nikolas’ balance, eating, drinking and movement increased over time; a fractured right hip and, when he was 29 years, a severe fall led a 6-hour operation to repair his right arm.

These and other incidents further worsened his ability to walk and balance himself unaided. Since then, Nikolas has required 24-hour assistance to ensure his safety when moving around and to live as normal and happy a life as possible.

Faced with this rare disease and having been in the dark for so long Nikolas’ parents embarked on a journey of turmoil, pain and endurance but never gave up their fight to save him and learn more. Nikolas himself, as he grew older and more acutely aware of his situation, developed a spirit of his own and has proved to be a victorious warrior in his battle against the disease.

The Nikolas Symposium is an exceptionally poignant and important aspect of his life, and he remains to this day an active and proud spokesperson for the symposium named after him.

‘The impact the disease has made on me and my life is almost beyond words. It sometimes makes me sad, angry and very tired. Sometimes my mind cannot figure it all out and the question is always, ‘why me?’ But the Symposium has shown me that I am not alone. My struggle has left me determined not to allow myself to settle for less in life…’ 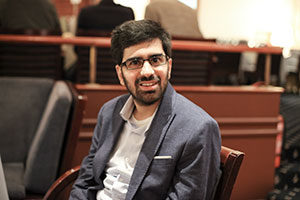 What is the Nikolas Symposium?

The Nikolas Symposium is the leading scientific think-tank focused on a group of rare diseases called Histiocytic disorders. Established in 1989 and held annually in Greece, the Symposium welcomes scientists, researchers and medical professionals from all over the world to examine, deliberate and debate the pathogenesis and structure of the diseases.

The goal of the Nikolas Symposium is to shed light on and spread awareness of these little-known diseases by engaging more frequently with patients, promoting a thorough understanding of the condition and ultimately aspiring to finding a cure.

Each year, a steering committee composed of leading professionals proposes a particular scientific topic of relevance to the diseases to be discussed that year. The committee invites prominent experts to attend the Symposium, fostering a lively and informative debate over a three-day period.

Clinicians, doctors and scientists from all over the world gather to discuss the relationship between the chosen topic for that year and the cause of Histiocytic diseases. Moreover, they get the chance to meet with patients and their families, an experience that not many medical practitioners are exposed to before the Symposium.

Apostolos and Elizabeth Kontoyannis, Nikola’s parents, were committed to finding a cure for their son and to help others confronting the same experience, both patients and families alike. It was their determination that cultivated the idea to organize broader research and scientific meetings. Dr. Jon Pritchard, Nikola’s primary doctor, approached the Kontoyannis family with the idea of creating an international think-tank to spread awareness and eventually find a cure for Histiocytic disorders.

In the spring of 1987 a small gathering of doctors, scientists, parents and patients from across the world took place in Cambridge, England. They came together to discuss what was then a mysterious cancer-like disease, named Histocytosis X. This gathering marked the beginning of what is today the Nikolas Symposium.

The primary goal of the Nikolas Symposium is to find a cure. By bringing together world-renowned medical experts from across globe, we hope to create long lasting partnerships, friendships and international collaborations that will work together with this singular, very important aim in mind.

We strongly believe that through these partnerships and international collaborations, a rare disease can be studied effectively. Over the course of three days, the participants of the Symposium form lasting bonds with fellow experts in the field, and with parents and patients, building an international community sharing a common mission.